Picture the scene: a school hall full of children, teachers and two rows of parents. It’s Friday afternoon Sharing Assembly and at the front are two chatty nine year-olds explaining the history topic they have been working on all week. Behind them is a three-quarter-size replica ancient Egyptian coffin, exquisitely decorated, standing vertically and being held up by two pharaonic guards with spears. The audience are impressed and reply with unrestrained enthusiasm when asked if they’d like to see inside the cardboard sarcophagus.

One of the guards pulls back the lid and, to everyone’s astonishment, inside there is a Y4 mini-mummy wrapped in loo roll. As the teacher in charge I am standing there enjoying the gasps but somewhat worried that they might turn to wails considering there are five-year-olds present, especially when the ‘dead’ body slowly raises its arms and starts staggering out of the coffin. But there are no screams or tears, just open mouths and a few guffaws from the sides of the room. The badly bandaged figure lurches to the back of the hall and finds a chair. ‘Oh look,’ I quip, ‘It’s gone to sit with the other mummies.’

Yes, this really happened, back when I was a young (and fun-loving) teacher in a Yorkshire primary school. I wish I had a picture of the epic sarcophagus and that brilliant mummy but alas this was the early 90s, pre-internet and mobiles. A camera in class was rare. But here’s an outdoor reconstruction for fun: 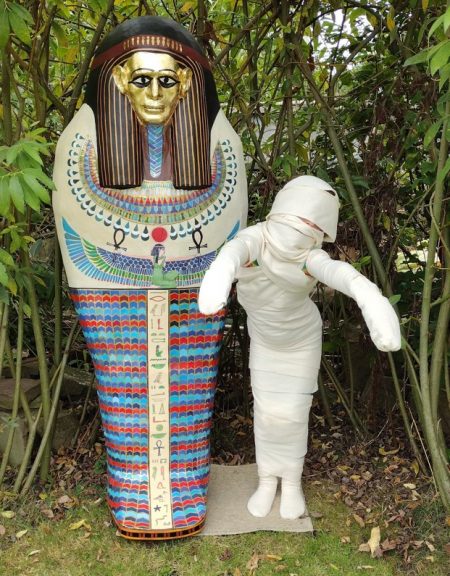 Jump to 2021. I have been commissioned by The British Museum to write a children’s book on Ancient Egypt (published by Nosy Crow) to come out in time for the museum’s exciting autumn 2022 exhibition celebrating the decoding of hieroglyphs with the Rosetta Stone. Wow, how exciting…. My editor explains that whatever the book contains, it must explain to young readers how hieroglyphs work. 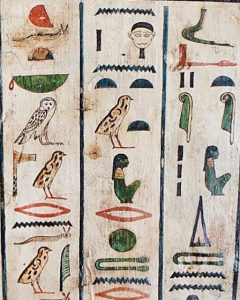 We decide that this would make an excellent puzzle adventure book. At the centre would be a story of two Egyptian children in the year 1422 BC who spot a gang of tomb robbers planning to raid the pyramid grave of a queen. The children find some of their secret messages – but what do they say? The reader must help the kids to decode the hieroglyphic signs. Can the evil gang be stopped before it’s too late? 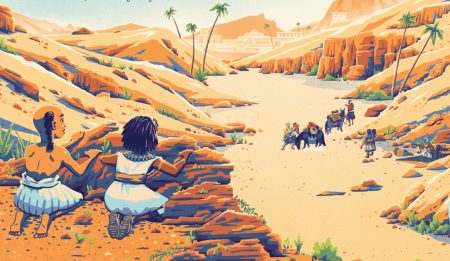 I went for a meeting at the BM and met the Curator of Ancient Egypt (believe it or not his office is behind a SECRET DOOR) and the idea went down well. Then I toured the museum galleries to have a look at the wonderful real ancient Egyptian artefacts. And of course I saw real ancient coffins. An idea popped into my head… I recalled the hilarious mummy assembly in the 90s… how good would it be to make a new coffin to take into schools when the book is out, I thought…

So, as well as writing the book I started making a child-sized cardboard replica ancient Egyptian coffin, as you do! Oh, and the book has turned out EXTREMELY well, with spectacular illustrations from James Weston Lewis: 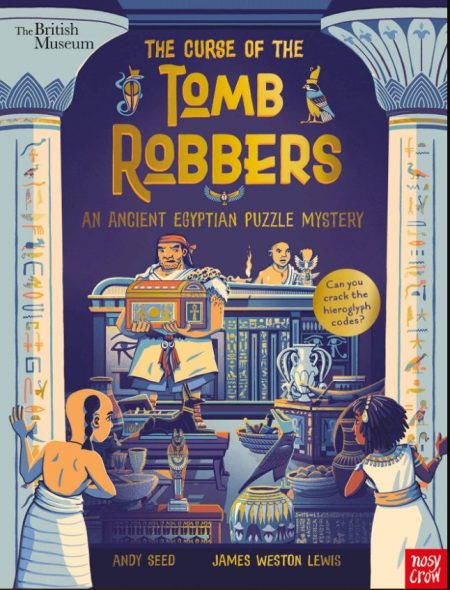 But what about the coffin? Well, here it is, finally finished after a lot of work! I made sure that all the cover decoration was authentic, based on real Egyptian sarcophagi, and that the eyes pop out (in true gory mummy style) for peepholes/breathing for any kid brave enough to climb inside… 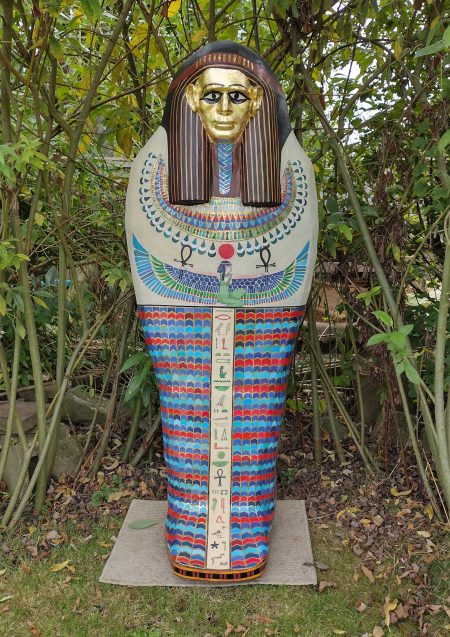 I even used real gold leaf in places! But how did I make it? OK, hopefully these pictures tell the story. It’s basically extra-thick corrugated card with papier mache and acrylic paint on top. And LOTS of glue! 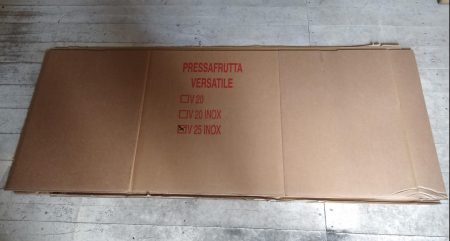 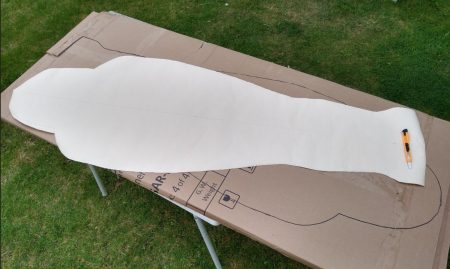 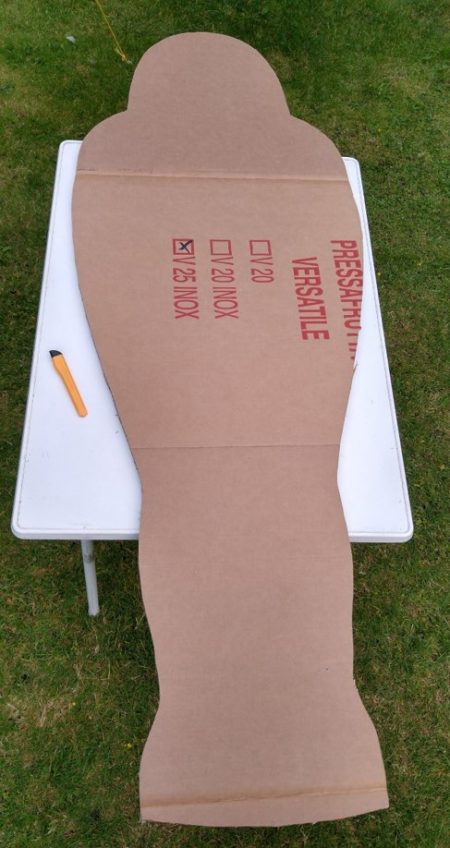 Craft knife to cut out the base 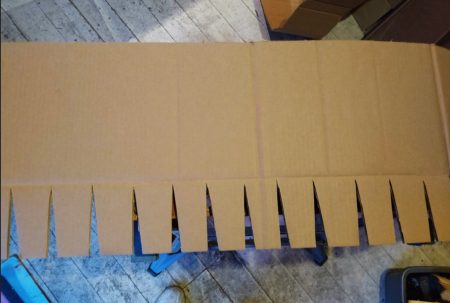 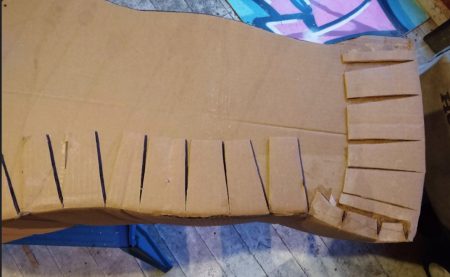 Sides fixed to base by gluing flaps 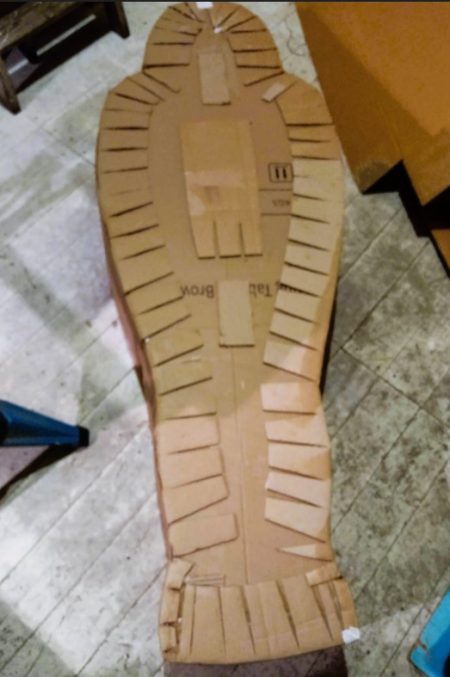 The bottom of the base with added pieces for strength 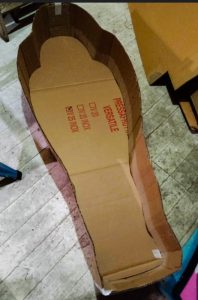 The base showing how the sides follow the shape

Sadly, I forgot to take more photos in between these two stages. To start the lid I drew around the top of the base on another piece of thick corrugated card then cut this out. The curved body shape is formed by gluing thick upright pieces (in the shape of elongated semicircles) to the base of the top then reinforcing these. The feet were done the same way, using masking tape to hold the card while the glue dries. 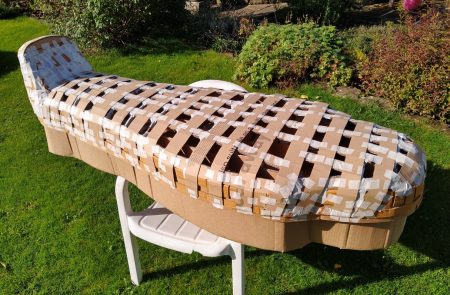 Strips of card added op top of the upright curved pieces, both across and along 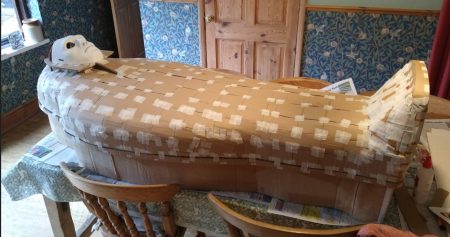 I cheated with the face and bought a plastic mask! 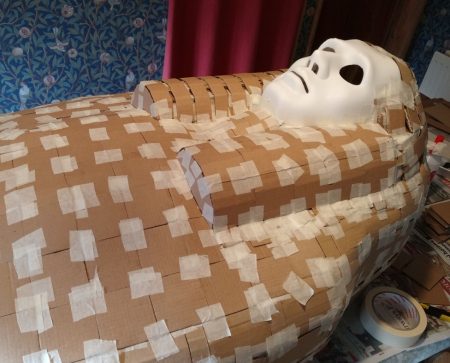 Squares of thin, bendy corrugated card were glued and taped over the strips to give the body shape and hair 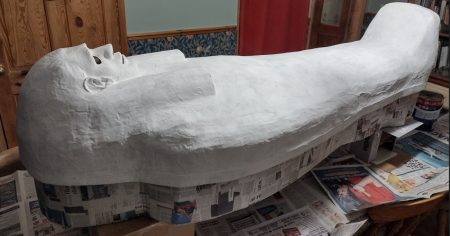 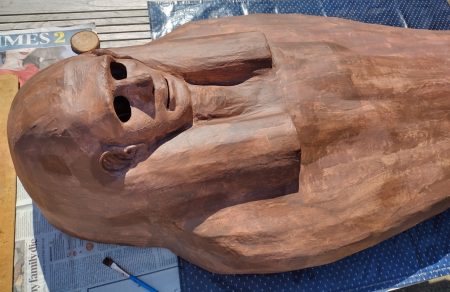 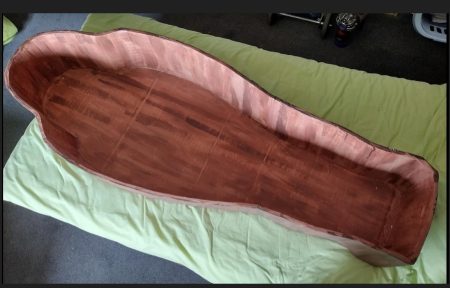 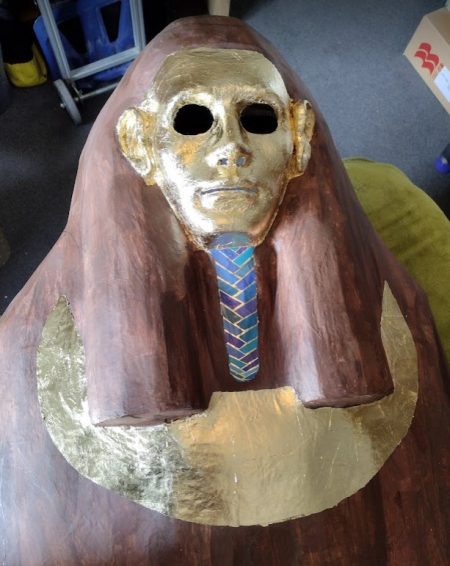 Yes, it did take a long time and I made it over many months doing a small amount at a time, working by trial and error (mostly error…). And yes the thing did terrify a few visitors to the house, but I managed to invite a mini-mummy around for a viewing and she really liked the coffin (and the book): 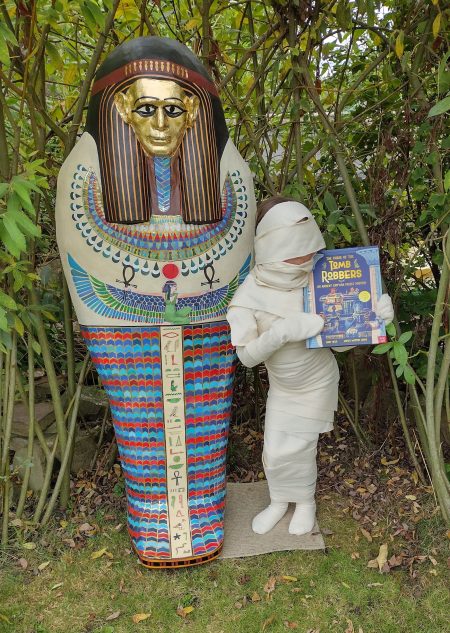 If you are a UK teacher and would like me to bring the coffin into your school and give a talk about it then I am offering the opportunity! This would be part of an exciting interactive session about Ancient Egypt, based on the book The Curse of the Tomb Robbers, with an introduction to how hieroglyphs work and lots of facts (especially about Egyptian beliefs about the dead), plus fun challenges and activities. We may even see if there is someone willing to be an ancient mummy and climb inside the sarcophagus!

The basic cost of this special Ancient Egypt day is £440 plus travel from Gloucestershire. Use the contact page to email me if you are interested. Book early so you don’t miss out!

You can read more about the book here. 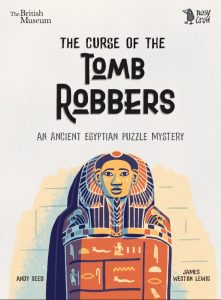 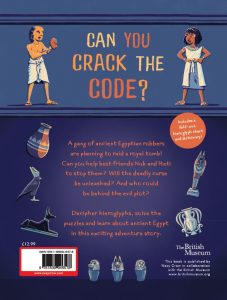 Association is the key (Older)