World Book Day 2017 has come and gone and I have nearly recovered. For an author like me who visits a lot of schools it’s the busiest time of the year and over the 2-3 weeks around it I visited 10 schools, did a schools’ author event with another 9 schools and managed to fit in a book festival weekend in the middle. Altogether I worked with around 2600 children and well over 100 adults. Phew-woo-zah! 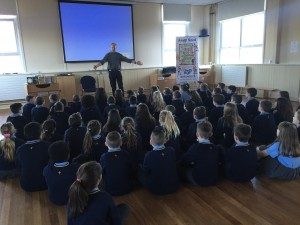 A lot of fun was had by everybody. I visited four schools in Leeds to kick off, organised by the excellent Leeds SLS team. After that it was a dash across the country to Wakefield, Sheffield and then Middlesbrough where I had a fabulous day with the wonderful St Joseph’s RC Primary.

The school had done some epic prep and there were displays about the visit (and my books) everywhere. The children were so enthused it was a joy, and they had a special dressing up comp with a silly twist (because they’re such big fans of the Silly Book) and they even had a tongue-twister comp (having read my Wacky Words book) – here was the winner, which earned a signed book.

After that it was a drive across the Pennines (through a downpour) to the glorious Lake District (now with extra lakes) for the excellent Wray Children’s Book Festival, organised by the National Trust. It was held in the amazing Wray Castle and there was a wondrous turn out of top authors and illustrators including Axel Scheffler (The Gruffalo), Tracey Corderoy and Steve Lenton (Shifty McGifty), Steve Cole (Young Bond), Nicola Davies, Ed Vere, Will Mabbitt, Gill Lewis and many others. Here’s the NT’s video:

I had a great time launching my Ned the Nature Nut book and we had some hilarious jokes from the kids in the audience (Did you hear about the magic tractor? It turned into a field.).

After that I visited a lovely school in Skipton and then joined in the huge fun of Leicester Author Week where over 5000 kids have a session with a wildly enthusiastic author. It was great to meet fellow writers Polly Ho-Yen and David Harmer there and to work with the amazing team of organisers from Leicester’s Whatever It Takes (to get children reading) project.

Oh, what could be better than telling children all about good books!

Ned the Nature Nut is here! (Older)
Making the most of an author visit (Newer)