How do you get 300 kids (and teachers) along to a book festival? What’s a good way to generate excitement about poetry and reading? Where can I see over fifty children perform poems on a real stage in a theatre in front of a huge, buzzing audience? 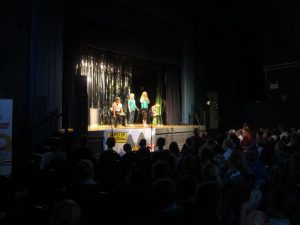 The answer is THE P-FACTOR!

Just in case you don’t know, the P-Factor is a poetry performance competition or slam for schools which takes place every year at the Ryedale Book Festival in glorious North Yorkshire. It began in 2012 and has now become established as one of the highlights of this excellent festival. The Grand Final is streamed live to over 1000 children watching back in their schools.

This year we had fifteen schools taking part. Each school holds their own auditions and chooses a team of children (ages 7-11) to represent their school at the Grand Final in our local theatre in front of an audience of 300 children from the various schools, each madly supporting their own group. Children perform poems from books which they have chosen, with the idea of promoting reading – it’s not about writing poetry – but it is all about bringing good poems to life through dramatic performance.

The teams are watched by a judging panel of three authors/poets/actors who choose the eventual winners and runners up. The judges also present workshops in the morning so that the children at the event get a whole day of fantastic interactive poetry fun. This year’s judges included poet Joseph Coelho and the actor and costumier Tabitha Grove. Andy Seed is the front man!

The standard this year was amazingly high and the judges had a brutal time trying to choose winners but in the end St Mary’s, Malton were awarded silver medals for a great runners up showing and the brilliant winners were Leavening Primary whose teacher told us that the performance was all the girls’ own idea.

What a great day and what a wowsome way to promote poetry and get kids performing. If you want to see a little more there a video of the 2013 final here.

Double Book Launch! (Older)
How did we let this happen? (Newer)