Edinburgh is surely the most impressive city in the UK in so many ways. The mighty castle dominating the town, the elegant Georgianosity of the streets, the coastal setting and the dramatic hills framing it are there just for starters. Then there’s all the history, the culture, the drama and of course the festivals and Fringe which set it all alight each summer. 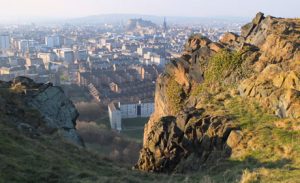 I was very pleased to be invited to one of the very best things about Edinburgh this August and that is the International Book Festival which takes place each year in the lovely Charlotte Gardens just off Princes Street. I was asked by The Royal Society to be part of their team presenting science activities for children to promote the 2016 Young People’s Book Prize, which celebrates the best science books for ages 4-14. 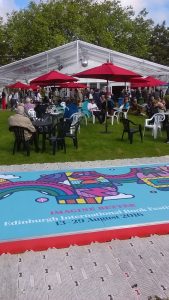 I was one of the shortlisting judges this year and helped to choose six superb non-fiction books, which are currently being read and voted on by children in schools and groups across the UK. Here they are: 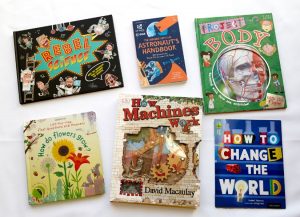 The terrific Public Engagement team from The Royal Society had planned six fun practical science activities for children and families to do at the festival, one based around each book. I spent most of my time making flying mini-rockets to highlight the excellent Astronaut’s Handbook. I also had a lot of fun helping kids hear the weird laser battle noises that Slinky springs make if you know how to hear them!

Once we were set up the doors opened and lots of children and families came in and did lots of investigative things with slime, seeds, electric motors and marshmallow/spaghetti structures as well as rockets and Slinkies. It was epic fun. 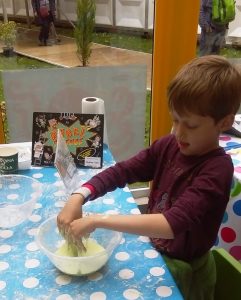 The Slime (cornflour goo, to highlight the brilliant book Rebel Science) proved especially popular with younger visitors as you can see… 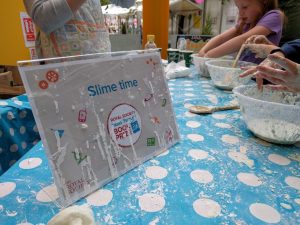 And every single person was wowed by the sci-fi sound of the Slinky:

Over the two days of the Festival’s first weekend, hundreds visited our tent and lots of children voted on their favourite among the six books. 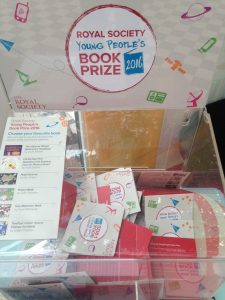 Here’s a panorama of the event during setup:

We were pooped by the end on Sunday but had the wonderful authors’ yurt in which to relax and enjoy the festival’s delightful hospitality.

I managed to see a bit of the Fringe too, but let’s not talk about that. If you go to Edinburgh in August, don’t miss the Book Festival (but do climb Arthur’s Seat – he won’t mind).

Festivals & Libraries – this is for you! (Older)
Double Book Launch! (Newer)