Life has been hectic these last few weeks as it always is at this time of year for children’s writers – it’s the curse of World Book Week where every school wants an author at the same time. Last week finished with a great visit to the excellent Priory Primary School in Tynemouth. If you’ve never been to Tynemouth I can highly recommend it as a very smart historical town by the sea.

Then earlier this week I made a rare sortie ‘darn sarf’ to Hertfordshire to visit the equally splendid St Mary’s School in North Mymms near Hatfield. I don’t usually travel this far but made the special effort because the deputy head is someone rather special: I last saw her when she was a girl of about 9 in my class at a North Yorkshire primary school back in the eighties. It turns out that the delightful Vicky was none other than the back end of a certain pantomime cow that had an unfortnate (but hilarious) mishap as told in my book All Teachers Great and Small.

The staff at the school are lovely but I must mention a lad of about 8 who came up with the funniest line of the week. I was teaching his class a poem and explained how I wrote it, following a simple structure. “You could write one like this,” I said. “It could even be as good as mine or better. There’s only one way to find out…”
“FIGHT!” screeched the lad, whereupon the teacher almost fell off her desk laughing. If you don’t get this then you don’t watch Harry Hill’s TV Burp. It was very, very amusing.

And so to Wednesday this week and The 57th Hull Literary Lunch. I was invited to speak to the diners, along with The Fabulous Baker Brothers, who have a cookery show on Channel 4. They are young, charming and extremely knowledgable about food, particularly baking, as the fifth generation of a breadmaking family from Gloucestershire. I really enjoyed their talk about how they became established then suddenly found themselves in the media spotlight. They are genuinely nice guys too and their book is a real treat.

My own talk went down well and I was glad to sign quite a few copies of my book at the end, even if I couldn’t quite compete with the two young, good-looking TV chefs at the next table. Right, next week I’m playing Pilate in an Easter drama for schools. It’s all go, tha knows… 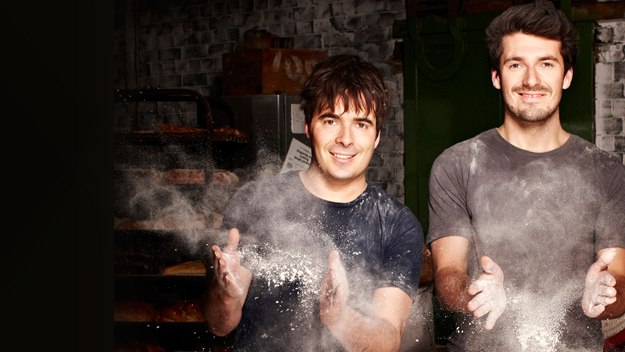