It was 2009 and my manuscript for All Teachers Great and Small was on a shelf gathering dust. I’d sent it to publishers, agents and more publishers but no one had seemed to even look at it for some reason. Then a friend who was recovering from an op watched some daytime TV (never seen it myself) and The Alan Titchmarsh Show appeared on ITV1.

The Yorkshire gardener-turned-chatshow-host announced a new competition open to the public: ‘The People’s Author’. They wanted true-life stories, real, moving, interesting, funny, riveting biographical tales, well told. My friend suggested I enter and, not being a celeb-oriented fellow at all, I took some convincing. But, noting that the prize was a book deal with a major publisher I eventually sent off 1500 words from the first chapter then forgot all about it.

Months later I received a phone call from an editor at Orion Books to say that I was through to the final 16 and would be on TV, interviewed by Mr Titch himself. Quelle surprise.

The experience of the show itself was bizarre: we were given no inkling of what we’d be asked and it was filmed in front of a live audience. There were four contesants and we were made to sit on a giant book before being grilled by three publishing types: two authors and the editor in charge of the competition. One of the writers was Cecelia Ahern and the other was, embarrassingly, personally know to me: my old English inspector Gervase Phinn…

I didn’t win the competition or even the heat as it happened but I did much better as eventually an agent did read my full manuscript and a great book deal soon followed. I hope to have a video clip from the show soon but in the meantime here are a few pictures from the programme. (Mr T is very personable, btw). 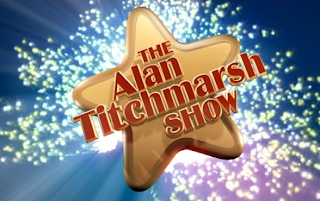 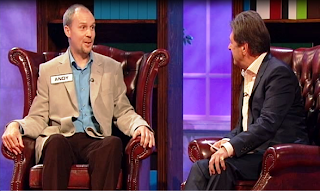 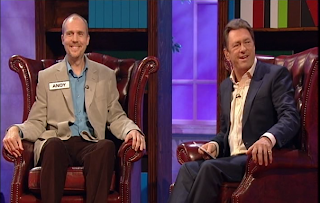 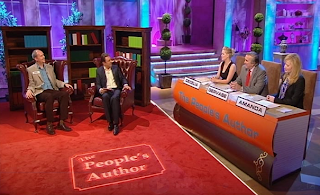 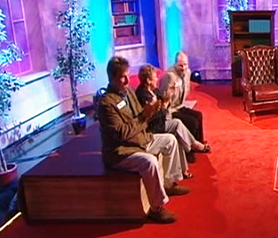