Nothing to do with books, Dales, teaching etc but I so enjoyed Man Utd’s 8-2 obliteration of Arsenal at the weekend that I have celebrated by providing you here with the full joy of Gazzetto Dello Sport’s report on the match, translated from the Italian by Microsoft Bing. The ending is particularly good:

Disaster Gunners — After the collapse of Tottenham, the second half of London committed today meets the same fate: Arsenal makes the end of the “hated” Spurs and was soundly defeated at Old Trafford. Embarrassing the difference in values in the field: the recent sell-offs and many absences among Gunners (Sagna, Vermaelen, Squillaci, Song, Bendtner, Gibbs and Gervinho, just to name a few) require Wenger to field a defense Jenkinson-Djourou-Koscielny-Traore impractical at this level, as well as Coquelin in the middle of the field. United also has on the pitch his young, but these elements already tried value as Evans and Jones instead of Central Ferdinand and Vidic, or as Bennett and Welbeck. The 20-year-old striker is the man who opened the scoring after 22 ‘: Anderson serves the area with a LOB and he shoves his sixth consecutive goals to head of Premier League matches. Unfortunately, a muscle trouble forced him to leave the field a little later, replaced by the returning “Chicharo” Hernandez.

Triple Rooney — the race could re-equilibrate themselves when the referee makes a dubious penalty to Walcott for a slight contact with Evans, but De Gea redeem a complicated season starts the penalty to parrying Van Persie. So when Young invents a fabulous right around the 2-0, inertia is all on the side of the Red Devils, who are 3-0 with a free kick from the edge to Rooney. Before the break, a diagonal Walcott worth the 3-1, but it’s still Rooney to inaugurate the revival with another masterly kick for the 4-1. Then “Wazza” plays the role of the man assists and serves to Dwarf the comfortable 5-1 before freeing Szczesny. United is a river in full: enter Park and with a low shot into the bottom corner is 6-1, 6-2 when the left Van Persie finally part of the door. But it’s not over here: it corrects the second admonition Jenkinson’s disastrous match, then Walcott commits foul area on Evra and grants Rooney from floppy hat that is the 7-2. Icing on the cake the second fireball of Young, who fixed the score on 8-2 in full recovery. A harsh lesson for Wenger. 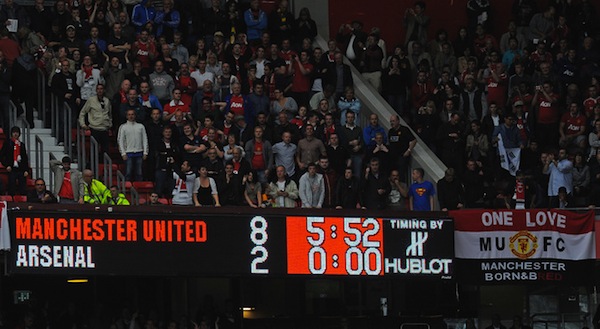