I visited a secondary school in Rochdale last week to work with a science class who were writing picture books for younger children to explain concepts like habitats, adaptation and food webs. It’s an inspired activity and the students had some clever ideas about storylines once I’d explained how narrative arcs are constructed. Some of the illustrations are priceless too and I’m hoping to see a video of the class reading their stories to a group of infants.

Then there was the afternoon… I was given a one-off session with a group of Y8 students who had an English class. I was asked to do some poetry and took in a few light-hearted pieces to read out to give them an idea of what I write. I read the following poem of mine, a tribute to the mighty John Cooper Clark, to the bemused class, who didn’t know what to make of it. The teacher, however, was laughing her head off in the corner.

There’s a shop in Crewe
Called Fifty+ Fashion,
And it’s run by a lady
Who’s a pensioner assassin.
I went there once,
Returned a dress for my mum,
And this woman told me off
For chewing gum.
I gave her some cheek,
But she narrowed her eyes,
And it soon became clear
I had been unwise.
She sprang from the counter,
With a whoop-ass stance,
Armed herself with merchandise
And started to advance.
Then with a multisaver pack
Of panty-hose,
She pummelled my spine
And rearranged my nose.
I tried to stand my ground,
But what can you do
‘gainst a Ninja shop assistant
Aged 72?
It was Fists of Fury
Meets Jackie Chan,
But I was being dismembered
By somebody’s gran.
An OAP warrior
By the name of Maude,
With varicose veins
And a Kendo sword.
Then she took out her teeth,
And made my lip thick
With a perfectly executed
Butterfly kick.
(All those years
Of making jam
Had given her arms
Like Claude Van Damme.)
I tried to do a runner
But she locked the door,
And with a combat manoeuvre
Pinned me to the floor.
The last thing I knew
Was the touch of death
From elderly retailer
With peppermint breath.
So the moral of the story?
Well if you go to Crewe
Avoid Fifty+ Fashion
Or you’ll be pulp too.
Andy Seed 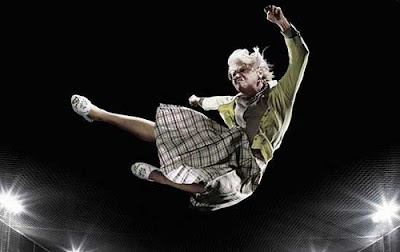